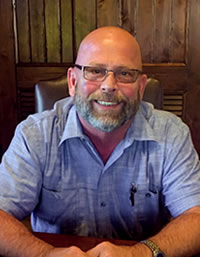 Jake began his career in 1988 working for Brooks Distributing in Conroe, TX. as a part time warehouseman while attending Sam Houston State University. After earning a degree in Kinesiology Jake stayed on with Brooks holding positions in the merchandising, customer service and sales departments during the 10 years he worked there.

Jake left the beer business for six years from 1998 until 2004 during which time he ran his own small business and utilized his degree by teaching and coaching in the Conroe Independent School District. However, his love of the beer business called him back in 2004 at which time he began his career with Faust Distributing. After joining, Jake assumed the role of account manager and later developed and implemented the company’s internal training program as Director of Training and Development.

In February of 2009, Faust purchased Holloman Distributing in Trinity, TX, and Jake was promoted to General Manager of Faust Distributing’s North Branch. His responsibilities include managing all aspects of the branch’s activities concerning sales, merchandising, marketing, warehouse operations, delivery, and administration.

Jake and his wife Missy currently reside in Elkins Lake in Huntsville, TX. and have four grown children; Kelsi, Demi, Blake and Cody.