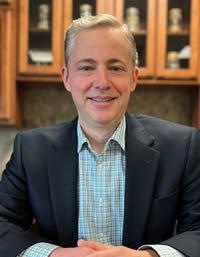 Harry was appointed to the General Manager position for the Faust South Branch in July 2020. Harry began his career with Faust Distributing Company in 1993, shortly after graduating from the University of Houston with a bachelor’s degree in business administration. Harry has held a variety of positions in his 27 years with Faust, ranging from Warehouseman, to Customer Service Representative and eventually to Account Manager, selling the Faust portfolio to his assigned group of accounts. After a period of time in the sales department, Harry was transferred to the information technology department, where he started as the Network Administrator and ultimately was promoted to Director of Information Technology, a position he held for 12 years, and one which exposed Harry to all aspects of the business, including warehouse automation, operations, sales and administration.

As General Manager of Faust South in Galveston County, Harry is responsible for all aspects of the branch operations, from sales to delivery, fleet, warehouse, marketing and administration. Harry brings a wealth of experience to his position based on the multiple positions he has held over his 27-year career.

Harry and his wife Nancy currently reside in Friendswood with their 2 children, Harrison and Hudson.