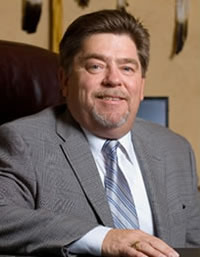 In his current role, Law is responsible for managing and coordinating all suppliers’ marketing and advertising programs relative to sales, distribution and retail execution. In addition he oversees the in-house print shop, point of sale inventory, special events department and ethnic programming as they relate to the various suppliers of Faust Distributing Company.

Law began his career in the sales and distribution industry as a store manager for Super D Drug Stores, a division of Malone and Hyde in Memphis, Tennessee. After managing several stores in Memphis and then Jackson, Mississippi, Law moved to Houston and joined National Convenience Stores as a district manager in 1980.

Beginning his career in the draft department as a draft technician and specialist, Law quickly was promoted to special events coordinator, responsible for all local, civic, community and special event related activities for the company in East Harris County. During this time he also served as the company’s representative working with the fellow Miller distributors and Miller Brewing Company on county-wide marketing and promotional programs. In 1988, Law joined the management team of Faust Distributing Company as the south zone sales manager, responsible for sales, service, merchandising and various other duties associated with the day-to-day operations servicing the southern portion of the territory.

In 1992, Law served as the off-premise sales manager and oversaw the implementation of the company’s presale sales system. Law’s passion for the on-premise and previous experience working with Jay McKinney, vice president of on-premise sales, resulted with his promotion to on-premise sales manager later that year. He served in this role until 2002, overseeing the acquisition of several suppliers representing numerous brands, including imports, specialties and domestics along with the acquisition of additional distributorships in Montgomery and Brazoria Counties.

Law graduated in 1975 from Arkansas State University with a bachelor’s degree in business administration. He currently resides in the Humble with his wife, Elizabeth Ann, and continues to be very active in both civic and community events and activities.