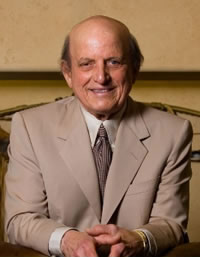 Don Faust has been active in the beer business almost all of his life. He started his career in the beer industry in 1944 at the age of sixteen. He worked the second shift (3 to 11 p.m.) at the Southern Select Brewery in Galveston, Texas, while he was a senior in high school. After graduating from high school in 1945, he joined the Falstaff Distributing Company and worked his way up to sales manager. To capitalize on an opportunity to meet Falstaff’s need for a distributorship in Baytown, Texas, he formed Faust Distributing Company in 1957, at age 30, becoming the youngest Falstaff distributor in the Falstaff’s 34 states area of distribution.

In 1965 Miller Brewing Company chose Faust Distributing Company to distribute their product. In 1981, the company's headquarters moved from Baytown to 8751 Flagship Drive in Houston, a 120,000 square foot facility, which was considered to be one of the most advanced in the industry.

Because of the fantastic growth Faust Distributing experienced, it outgrew it's Flagship Drive building and built a state of the art headquarter complex on a 30 acre tract of land on Interstate 10. This new complex consists of an office/warehouse facility of 170,000 square feet with a Phase I expansion plan of 36,000 square feet and a Phase II expansion plan that includes another 19,000 square feet for a grand total of 225,000 square feet. The beautifully landscaped grounds are a perfect setting for the Southwestern adobe architecture. Inside, Native American artwork, American Indian artifacts, bronzes and pottery create a warm, colorful and interesting atmosphere. An atrium in the center of the building provides a respite with its lush planting and clear pool of water.

As Faust Distributing has continued to evolve over four decades, Don Faust has made certain that the core values and culture of the company remain intact: commitment to excellence, family environment, youthful enthusiasm, aggressive attitude and fun spirit. From the beginning, he has promised to provide excellent service to all clients, treat his employees with respect, and uphold the reputation of the suppliers.

Commitment to Innovation
Faust Distributing has earned the reputation of being one of the most progressive distributors in the industry. Don Faust, his family, and his management team are committed to maintaining that reputation. The Faust team continually seeks to understand and anticipate changes affecting the industry overall and the Faust business in particular. They then update of redirect their operations to address those changes, remain competitive, and serve customers and suppliers as well as possible.

An example is in 1992, when Faust Distributing restructured into three main departments: pre-sales, direct sales, and customer service. This reorganization shifted the company from a typical “driver-sales” approach to a “pre-sales orientation” and resulted in a 10 percent increase in sales. This new pre-sales focus allows Faust employees to give their accounts a greater level of personal attention.

“Sell yourself first and your product will sell itself” is Don Faust’s personal philosophy of sales success. He and his management team host weekly meetings to equip the sales force with information and techniques to help them excel at their jobs. Employees are encouraged to attend learning seminars and frequent business retreats held at the Faust ranch.

Faust Distributing replaces its fleet every five years although the industry average is every seven to eight years. The company showcases delivery vehicles with its “Cadillac Package” equipped with accessories such as all chrome wheels, bumpers and sun visors. “When our retailers see one of these units parked at his place of business, it reminds him of his last visit to our offices. They connect our trucks with our facility and what we stand for: a quality image”, Don Faust said.

Commitment to Employees
Through his actions as well as his works, Don Faust demonstrates that his most valuable assets are his employees. He expects all employees to provide first rate client service on every call or visit, and he shows the same loyalty to his employees that he expects them to give to their clients.

Don Faust’s early start in the beer industry enabled him to learn all facets of the work involved in distributing the product. This knowledge made it possible not only to pass this experience on to employees, but have a better, more compassionate understanding of the employee’s position. Thanksgiving turkeys are given to each employee as Faust’s way of saying, “I am thankful for you,” and Christmas bonuses are given each year. He treats employees with respect and awards them for a job well done.

Don Faust maintains an open door policy so that he is available when his employees need him, whether for business or personal reasons. He enjoys helping employees and their families improve their quality of life and even assist family members of employees with job searches.

Commitment to the Industry and the Community
Because Don Faust is grateful for the successes he has achieved, he is committed to giving back to the industry and the community. He has been active in local, state, and national beer wholesaler’s associations for more than 40 years.

Under his leadership, Faust Distributing has been awarded Miller Brewing Company’s Miller Masters Award 16 times in 17 years, the most awards out of all Miller distributorships in the country. This prestigious award was used by Miller to recognize its top distributors for overall distributor excellence.

Don and his wife, Sidney, are actively involved with Texas Children’s Cancer Center. They have created retreats at their ranch, Squirrel Creek, for the cancer patients from Texas Children’s Hospital, their parents and siblings. Squirrel Creek Ranch offers a wide variety of activities and entertainment:  horseback riding, swimming, fishing, tennis, hayrides and scenic rides. The activity that tops the list is seeing the Faust menagerie of animals:  camels, kangaroos, zebras, buffalos, llamas, miniature horses, many types of deer and African exotic animals. The Fausts have held 75 retreats to date and look forward to many more.

The Fausts are also members of BRASS, Baylor Research Advocates for Student Scientists, which creates scholarship for medical and research students. Don and Sidney received the BRASS “Angels of the Year” Award in 1997 for their work with the Baylor College of Medicine research students. In 1998, they received the Pacesetters of Houston Award presented by the Cancer Assistance League, Inc. They serve on the Crohn and Colitis board of directors, and Sidney is on the board for the Huffington Center on Aging and the Baylor Partnership. In 2002, Sidney was selected as a Woman of Distinction, an award given for outstanding service to the community. She is on the Steering Committee for the newly organized Salvation Army Women’s Auxiliary. Gethsemane Baptist Church recognized Don Faust as honorary recipient of its Citizen’s Award for 1999.

The Fausts have opened their home to many organizations and charities for fund-raising. Their most memorable event was the annual fund-raiser for BRASS, which honored Dr. Michael DeBakey and celebrated not only his 50th year with Baylor College of Medicine, but his 90th birthday as well.